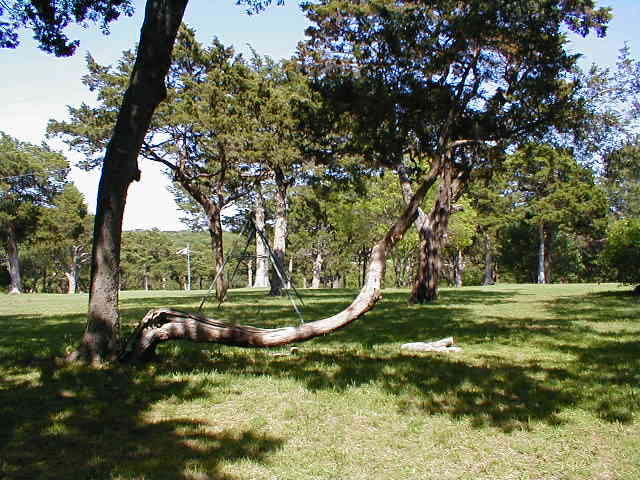 Eastern Red Cedars were used by the Comanche for a number of important reasons, but this is the only tree of this species recognized as a Comanche Marker Tree. Small for a tree of its age, it proved it was old enough to qualify as a marker tree when tree cookies from its wounds provided some of the tightest growth ring samples obtained from any tree in our research efforts.

The trunk is long with no real lateral limbs growing off the trunk until after the upward bend. Since the trunk did not touch the ground as it bowed outward for over 25 feet, the tree has shown great resilience over the years and has withstood the wind moving it in all directions as well as the buildup of ice and snow weighing it down. The stress on the trunk caused a ripple effect in the vascular system.

The generic Comanche term for a trail tree is nayuru hupi. In most cases, it would have been additionally described by its species which for this tree would have been Ekawapi for the Red Cedar. This particular tree was meant to identify a location making it a marker tree, but it would have also been considered a ceremonial tree, a medicinal tree, and a service tree because of the materials and resources it provided. For starters, the smoke from its leaves was used for spiritual purifying and the fruit of female Red Cedars was part of the Comanche diet.

Discovery of a bent Cedar was cause for attention from the Comanche officials and at the invitation of the landowner, they visited the site in 2002. As they approached the tree they spontaneously circled the Red Cedar and joined hands, singing to the tree in their native language. The Comanche officials recognized this tree was of great significance to their culture and heritage.