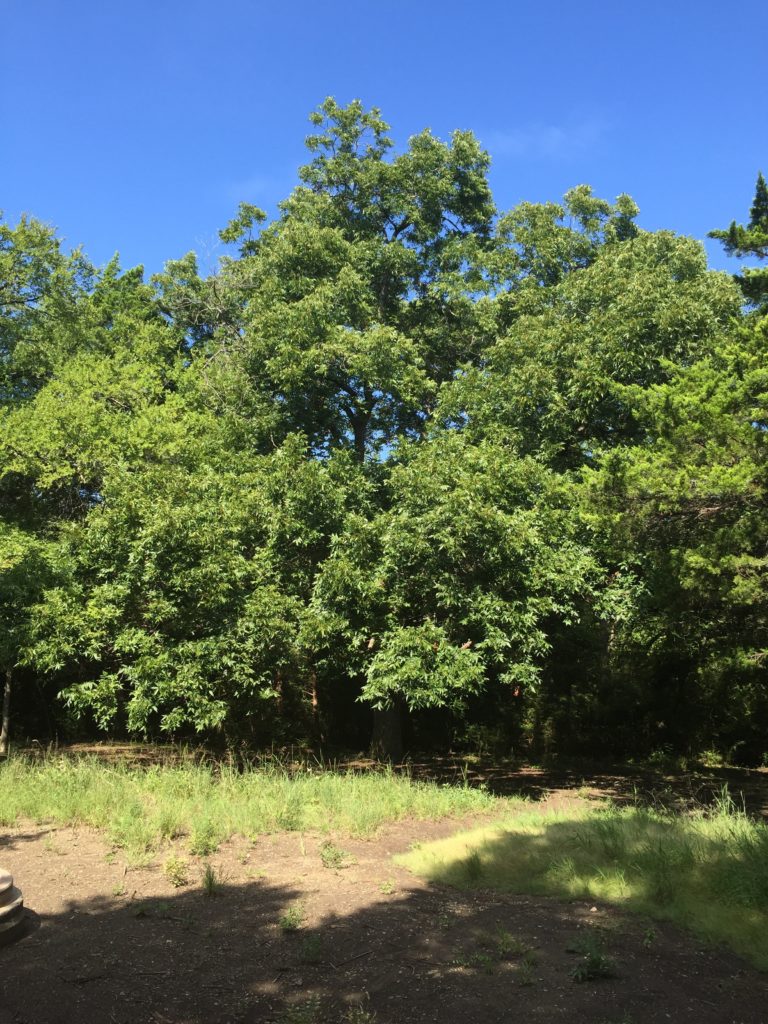 Enjoy the Shade of the Wisdom Tree

At the time of its nomination and dedication in 2004, the Wisdom Pecan measured 54 feet high with a canopy of 70 feet at its widest and 60 feet at its narrowest, and it had a trunk circumference of 8 feet.

The tree still stands today as a witness to history in the making and is obviously still growing (see pictures from dedication and from December, 2015.) Its past includes witnessing some of the earliest settlement of land south of Dallas, Texas, and the early establishment of the Boy Scouts in Dallas County. A campsite is in its shade, and close by is an area dedicated to gatherings and campfires. The story of the tree and the land it lives on is remarkable.

John Shelby Wisdom purchased the land where the stately Pecan tree lives in 1901. He bought 158 acres south of Dallas for $400 to establish a home for his family, including his wife (a former widow) Hattie Wright, and her son Madison Pinkney (Pink) Wright.

John first met Pink, a 12-year old fiddler, and through Pink, John met his mother, Hattie. This was after Wisdom had left his childhood home in Arkansas at the end of the civil war and came to Texas, where he found work on various cattle ranches. John and Hattie were married in 1880 and lived various other places in Texas before settling in the Dallas area in 1897.

After Hattie died in 1918, John and Pink stayed and lived on the land and Pink played the fiddle. Although he loved Pink like a son, John Wisdom became embittered and lonely, according to Bob Reitz, Scout historian. His tract of land was adjacent to land owned by Mr. Campbell, who allowed Boy Scout troops to camp out on his land. One day in 1920, worried about what he thought were unattended campfires and seeing smoke rising from the valley, Wisdom went over to see what was happening and to make sure the boys did not leave a fence gate open.

It happened to be a Sunday morning service that John witnessed as he stood hidden by the trees. According to Bob Reitz, Scout Historian and nominator of the Wisdom Pecan, John Wisdom heard the boys sharing and singing hymns around the campfire. He went over to the group and introduced himself to the Scout Master and the boys and stated that he had heard a mention of Scout Laws and would like to know what that meant. The Scoutmaster had the boys stand and go around the circle with each explaining in his own words one of the 12 points of the Scout Law. John Wisdom was so moved by what he heard that he told the scouts they could camp on his land any time. When Campbell sold his land for development, scout camping moved entirely to John Wisdom’s land. John Wisdom, according to Reitz, transformed from a crotchety man into a gentle, caring soul who became “Daddy Wisdom” to the Scouts.

He and Pink often joined the Scouts at evening campfires. Mr. Wisdom was knowledgeable about every bird and animal on his property and surely shared that information with the Scouts. In 1922 he and Pink deeded 185 acres to the Dallas Council of the Boys Scouts, today known as the Circle Ten Council. Before doing this he met with the Scoutmaster of Troop 1, Mr. T.A. Hord, and shared his vision for the camp and his desire that the land be used entirely for Boy Scout camping and activities. It is possible they met in the shade of, or near, this tree; it grows next to an artesian creek that ran through the property in the area where they met to discuss keeping the land natural and dedicated to scouting. Wisdom retained several acres and a small house for his lifetime, after which it, too, would go to the camp.

He and Pink, but especially “Daddy Wisdom” as he was now known to the Scouts, spent a lot of time joining in Scouting activities. When their house burned in 1924, the Scouts immediately went to work and rebuilt the house, guided by architect Harre Bernet, according to John Wisdom’s obituary in the Dallas Morning News.

In 1925 Pink died suddenly of a cerebral hemorrhage. Wisdom now felt totally alone except for the Scouts. At this point, Wisdom’s story takes another amazing turn. He knew several of his brothers had served in the Civil War and thought his older brother must have been killed in the war; his letters to Arkansas where they had lived had not been answered. However, his brother Bill not only was living, but was coming to Dallas for a Confederate reunion in 1925 and made inquiries about John. A surprise visit was scheduled and the two reunited.

The Wisdoms had a family reunion in Mulberry, Arkansas, where John met his other brothers and extended family. According to the Texas historical marker honoring Daddy Wisdom and Camp Wisdom, he was able to travel to Arkansas accompanied by several Eagle Scouts to visit with more of his family.

His death in February, 1931, is described in the Dallas Morning News obituary:

Daddy Wisdom became ill some time ago, but steadfastly refused to be taken to a hospital and remained in the home built for him by Dallas Boy Scouts at Camp Wisdom, which he gave to Circle 10 Council, Boy Scouts of America. Pneumonia developed and he became unconscious. Saturday his friends and scout executives transferred him to Methodist Hospital.

From the time Daddy Wisdom reached the hospital until his death, two Dallas scout leaders were stationed at the hospital.”

John Wisdom’s body lay in state in the administration building at Camp Wisdom, according to Bob Reitz, with a Scout always posted at his head and his feet until the service, which was held on the porch of his house. Reitz said the route of the funeral procession was entirely lined with Scouts, stretching all the way from Camp Wisdom to Wheatland Cemetery 2.5 miles away, where he is buried along with Hattie and Pink and his brother Bill.

At a Wisdom family reunion at Camp Wisdom in June, 1997, Bob Reitz developed a scavenger hunt for the children and others who wanted to participate. Each discovery yielded a clue to the next until the final find, which was a bottle hanging from a tree containing a piece of paper with these lines written by Bob:

Look all around
At what you see;
Enjoy the shade
Of the Wisdom Tree.

That term, “the Wisdom Tree”, stuck with him and led to his nominating the Wisdom Pecan and its certification as a Dallas Historic Tree in 2004.  To this day, the site is very busy with large numbers of Scouts camping almost every weekend.

The Camp Wisdom Pecan still stands guard and witnesses the growth of many young men.  The tree and its benefactor are a testament of outstanding land stewardship and whole-hearted giving.   John’s generostiy created a legacy that will live on for generations.  Well done, Mr. Wisdom.  Dallas loves and appreciates you today and forever more.

The tree is located on private property.