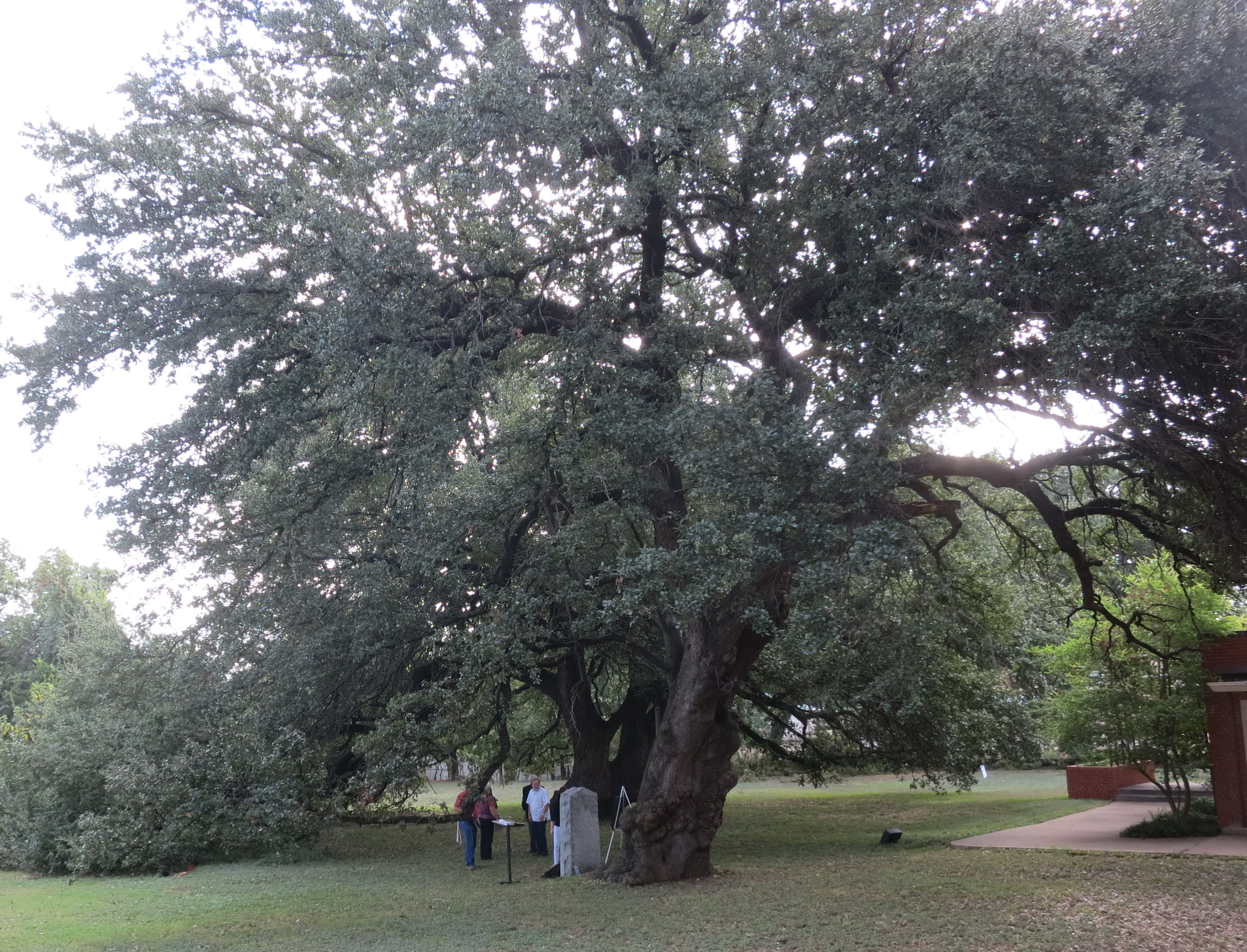 Indigenous people have lived along the Brazos River for thousands of years. In historic times the area of present-day Waco was occupied by the Wichita Indian tribe known as the “Waco” (Spanish: Hueco). Some historians think an Indian village described by Spanish explorers in the 1500s was at the current site of the City of Waco.

In 1824, Stephen Austin sent Thomas M. Duke to explore the Waco area after the Waco people tried to defend themselves and their lands from settlers. Duke’s report to Austin, described the Waco village: “This town is situated on the West Bank of the River. They have a spring almost as cold as ice itself. All we want is some Brandy and Sugar to have Ice Toddy. They have about 400 acres planted in corn, beans, pumpkins, and melons and that tended in good order. I think they cannot raise more than One Hundred Warriors.”

A grove of huge live oak trees that once witnessed the Waco Indians and their village sits at 701 Jefferson Avenue. A Texas Centennial Marker, erected in 1936, stands among the trees to commemorate the Waco Indians who once lived here.

The Centennial Marker states that a Waco Indian village once stood on this site and that the Waco were forced to move when they were driven out by Comanches. That statement didn’t sound right to a Comanche official who was touring Waco in 2014. Though widely feared as “Lords of the Plains” in 19th-century Texas, the Comanches were trading partners with the Wacos.

According to several historical accounts, it was the Cherokees that feuded with the Wacos and caused them to abandon their village here. Some time after the attack by the Cherokees, the Waco tribe merged with the Wichita tribe at a reservation upstream. During the Civil War, Confederate officials exiled the Wichita to Oklahoma.

The Waco site was on the banks of Barron’s Branch.  There was a spring that would have made this an excellent camp site. In more recent times, the branch and spring were filled in and several big live oaks on adjoining properties were cut down. On the southwest side of the property is the old BarronSpring School building.  The building now houses the Helen Marie Taylor Museum of Waco History. The museum is currently closed, but discussions were held to open it again.

In October, 2014, tribal leaders of the Wichita and Affiliated Tribes of Anadarco, Oklahoma visited Waco for a tour in advance of the ceremony to recognize the trees and to correct the error on the Centennial Marker. Wichita and Affiliated Tribes President Terri Parton, past President and Tribal Historian Gary McAdams, and member James “Bunny” Ross visited the site and, on the evening before the ceremony, participated in a panel discussion on Waco Indian heritage in Central Texas. They were planning to attend the tree ceremony the next day but had to leave early due to a tragic death back home. Later, Steve Houser, representing the Texas Historic Tree Coalition, presented the dedication certificate to tribal leaders in Anadarko.

A dual ceremony was held on Friday, October 10, 2014 to recognize the trees and to correct an error on the Centennial Marker.  President Mary Graves and Historic Tree Project Chairman Bill Seaman of the Texas Historic Tree Coalition read a proclamation and presented a framed certificate recognizing the live oak grove as Texas Historic Trees. Mr. Seaman described some of the features of the live oaks. Mr. Seaman pointed out that the grove is higher than the flood plain of the river. That is a safer place for the Indians to live but the trees wouldn’t get the benefits of floods like trees in the river bottom. Live oaks of the grove have a different form from live oaks that grow along river bottoms. They are shorter, often have gnarled trunks, and branches which often spread far out from the trunk. Typically, slow-growing trees of this size may be very old. There are a total of eight of these big live oaks in this immediate area.  Next, David Brittain of the McLennan County Historical Commission dedicated a granite marker at the foot of the Centennial Marker.  The new marker says, in part, “…it was the Cherokees, rather than the Comanches, who besieged the Waco/Hueco Indians in 1829-1837, causing them to disperse gradually and move on to other areas.”

Helen Marie Taylor deserves much credit and appreciation for her work on the museum and careful stewardship of these important trees. She is a Waco native with a deep interest in history. She bought the old Barron Springs Elementary School and surrounding land in the 1980s and began restoring the school building to create a museum. She recognized the historical value of the old trees on the property and knew the importance of leaving them as close to their natural state as possible. Her good work has preserved these living witnesses to history for generations to come. Thank you Helen Marie!