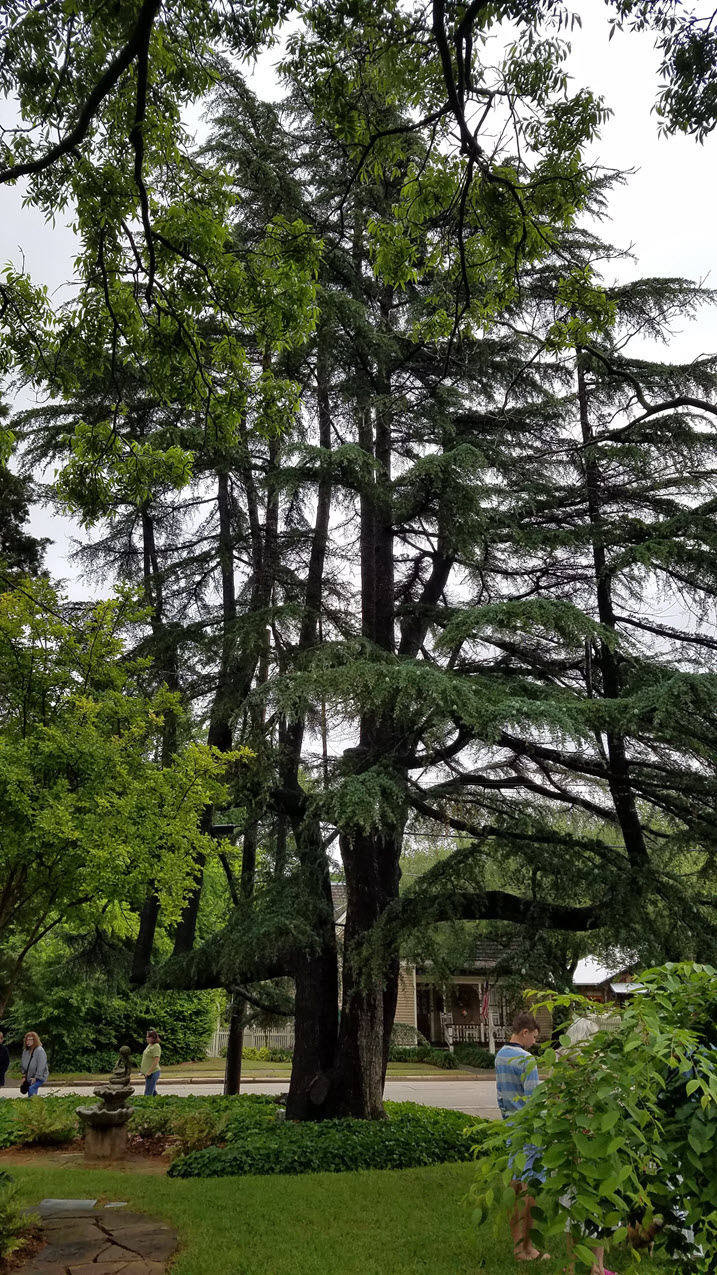 The house at 703 North College Street in McKinney, Collin County, Texas was built in 1905 by Mary Jane and W.D. Smith (1858-1938). As lovers of landscape architecture planning and design, the Smiths were meticulous as they picked out the plants and trees.

As it happens, the three Eastern Red Cedars and the Deodar Cedar in the front yard have a legacy of their own. And, it may have been forgotten except for Emily and Gary Graybeal who owned the property from 2017 to the end of 2019. When they purchased the property they recognized the importance of these trees and shared what they learned about them with the community.

The Graybeals also contacted the Texas Historic Tree Coalition (TxHTC) in 2018 and after a year of researching the trees, the coalition was able to proclaim the trees historic. In May 2019, the coalition described the trees with the statement, “The Smith-Graybeal Cedars are living legends and testaments to our local arbor history”. TxHTC also added the trees to the Historic Tree Registry and together with the Graybeals, they held a tree dedication on May 11, 2019, to celebrate the trees. A bronze plaque was placed in the front yard near the trees to share their story and their historical significance.

The three Eastern Red Cedars, Juniprus virginiana were purchased from Elbert W. Kirkpatrick (1884-1924). He was a Pioneer Texas Horticulturist and Nurseryman, as well as the owner of the Texas Nursery Company in Sherman, Texas. Kirkpatrick had co-founded the Sherman nursery with fellow nurseryman, C.C. Mayhew, in 1898. This joint business venture became one of the country’s largest production nurseries.

Kirkpatrick worked with Luther Burbank, known as the founding father of American Horticulture and whose birthday is celebrated as Arbor Day, to purchase the Red Cedars. Burbank brought them from the Stark Brothers Nurseries in Louisiana, Missouri (1816 to present day). Eastern Red Cedars are a native species to eastern and north-central Texas where they can live for 300 to 400 years and grow upwards of 70 feet.

Kirkpatrick also purchased a Deodar Cedar, Cedrus deodara for the Smiths that he sourced through Luther Burbank also, though Burbank brought the Deodar from his own nursery in California. The Deodar is a native to the western Himalayas, eastern Afghanistan, northern Pakistan, and India, so it is less common to find in Texas. This tree species lives up to 600 years and has a maximum height of 130 to 160 feet.

The Eastern Red Cedars demand attention as they frame the sidewalk entrance leading to the front door, greeting visitors and passersby alike. Even so, the multi-trunk Deodar Cedar with its upward-growing branches appears to greet everyone whose path crosses the corner of Bonner St. and N. College.

Individually and collectively, the Cedars are significant to the history and development of horticulture in the state of Texas as well as in the U.S. They are living witnesses to the work and life of the people who came together to bring the trees to McKinney, Texas- The Smiths, Kirkpatrick, and Burbank. Since then, they have witnessed the owners who followed the Smiths including the Graybeals and the new family who most recently moved in. The Graybeals were exceptional stewards of the trees and the Texas Historic Tree Coalition is grateful to them for recognizing the trees’ significance. We thank them for introducing us to the trees and for the efforts they made to preserve and protect these living witnesses so future generations may be able to enjoy them.