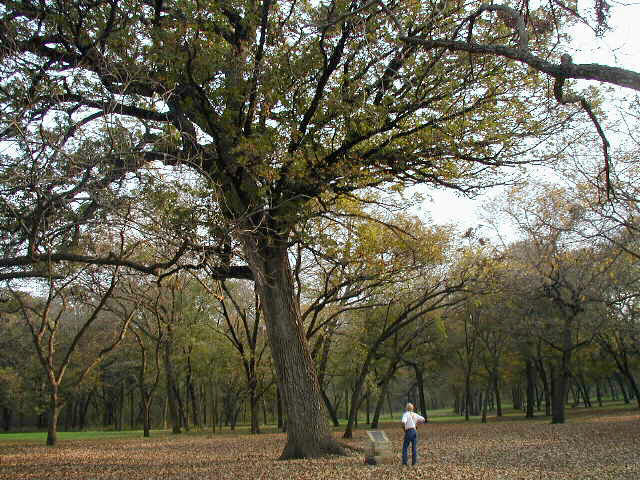 Located in the Southeast section of Bob Woodruff Park, Plano’s Quadri/Quincentennial Bur Oak (previously named the Bicentennial Bur Oak) is the largest, oldest known tree in North Texas. Its location in Bob Woodruff Park, referred to as a hardwood bottomland forest, is historically subject to flooding; therefore, the soil is very rich and contains sediment brought in from other areas by heavy rains and flooding.

The history of the area is also rich. Prior to the land becoming a city park, previous owners included the Dr. Daniel Rowlett Family, Colonel Landon W. Oglesby, the William T. Land Family, William D. Prince, and the Claude C. Albritton Family. The Land Family used the timber on the property for their west Plano farm, but somehow the Bur Oak tree was spared. The citizens of Plano celebrated the life of this magnificent tree and recognized the history of the land surrounding it at Plano’s 2002 Arbor Day Celebration.

Ownership of the site passed through many hands over time. Several of these families helped to build and develop Plano and North Texas. Among them is The Rowlett Family, for whom Rowlett Creek is named, and William Sachse, for whom the town of Sachse in named. The Oglesby Family owned a general store in downtown Plano.

Bur Oak trees are generally found along stream bottoms and the wood is heavy, hard, impermeable, and durable. The trees are very hardy, tolerating drought and city pollution. Thick corky bark enables these trees to withstand fire and other damage better than most Oaks.

The Bur Oak tree provides deep shade, has few insect or disease problems and in winter, the corky twigs and stout branches give it a picturesque appearance. The large acorns are sought after by wildlife.

Trees have always played an important role in this area. Early settlers often chose their locations with water and timber in mind; therefore, many people settled along Rowlett Creek. One of the previous property owners, William Prince, also loved trees and was the first in the area to hand graft paper shell Pecan buds onto the native Pecan trees, grafting over 1,000 Pecan trees along with his son, Dexter. For many years, people would come to the Prince property to gather pecans and thousands of pounds of paper shell pecans were harvested. People still enjoy coming to Bob Woodruff Park in the fall to gather pecans.

Then, in 2006 strong winds took down an enormous limb forty feet from the ground. The limb was used to estimate the tree’s age more accurately by expert arborists. The study of tree growth rings is called dendrochronology and there are various calculations that can be used to determine an approximate age for a tree.  Dr. Howard Arnott, a University of Texas at Arlington biology professor also examined the samples of the limb and found the limb was 226 years old. (See the YouTube video by Dr. Arnott.)