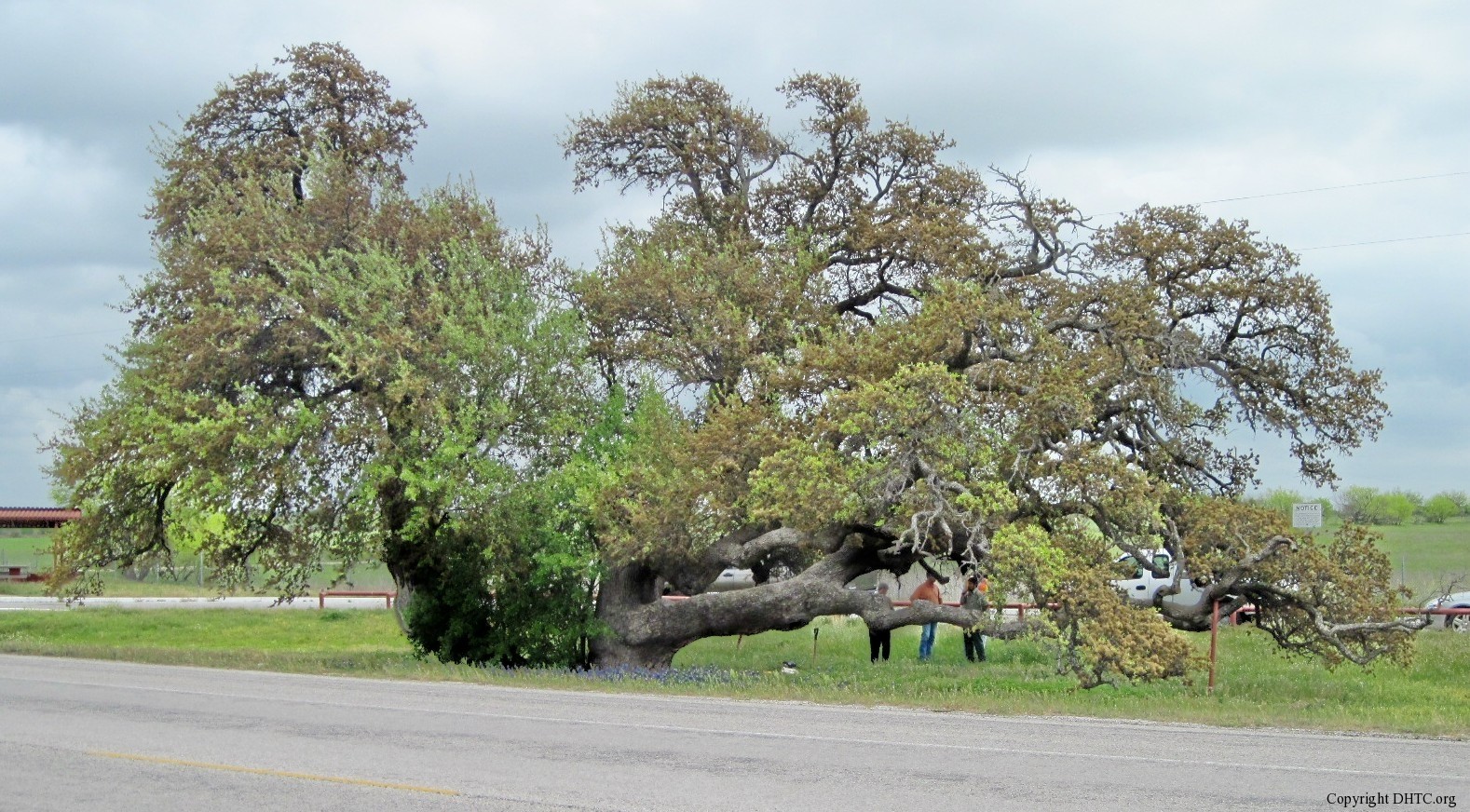 The massive Half-Way Oak has been a popular rest stop providing shade and comfort for those traveling on foot, horseback, wagons, and automobiles for well over 200 years[1]. Located 13 miles south of Breckenridge on U.S. 183 at a southern Stephens County rest area, the Live Oak tree got its name from its location on the carriage trail halfway between Breckenridge and the towns of Cisco, Eastland, and Ranger. It was also used as a rest stop on the original passage from Stephenville to Fort Griffin.

As one of the oldest landmarks in Stephens County, the tree was so well known that it was one of only two trees used as landmarks on an 1858 county map, a copy of which is at the Swenson Museum in Breckenridge. In 2010, the Texas Forest Service conservatively estimated the Half-Way Oak to be at least 200 years old. The 1858 map shows a large tree. Using simple math and assuming an age of 200 years, the tree would have been 42 years old when the map was drawn. To be used as a landmark, it was probably quite large, even in 1858, and therefore is likely older than the estimate.  Because the Texas Historic Tree Coalition does not core bore old trees, we will not know its true age until it comes down.

The grand old tree has survived many trials over the years. It has survived major drought, herbicides, a fatal motor vehicle collision, fires, telephone line placement, ice storms, and even the government, which threatened to remove the tree in the mid-1970s to widen U.S. 183. Residents of Breckenridge successfully fought the efforts and defended the tree[2].

Breckenridge residents tell tales about the Half-Way Oak and its presence in their history. Those include stories about Comanche and Tonkawa camping under the tree, residents finding arrowheads near the tree, as well as its serving as a stagecoach stop and a favorite place for travelers to rest in its shade[3].

Early in 2011, Mark Hanna contacted the Dallas Historic Tree Coalition (DHTC) to nominate the tree for historic designation. On April 29, 2011 (Arbor Day), DHTC and the Texas Forest Service designated the Half-Way Oak as an official Historic Tree and it was listed in the Historic Tree Registry as a living legend and a testament to all of the history which it has witnessed.

The most recent account of the Oak’s tenacity happened during the wildfires of 2012. According to Texas Forest Service Forester Courtney Blevins, the spreading fire threatened to destroy the old Oak, but did not prevail. The fire came all the way to the edge of the road across from the tree and stopped. It didn’t touch the tree, but started up again just on the other side of it, sparing the old giant.

[1] Doodle Bugs and Cactus Berries,  by Betty Hanna, Feature Editor of the Breckenridge American for 40 years and member of the Texas Historical Commission.

[3] Confirmed by tree nominator Mark Hanna with landowners and multi-generation family residents of the community.