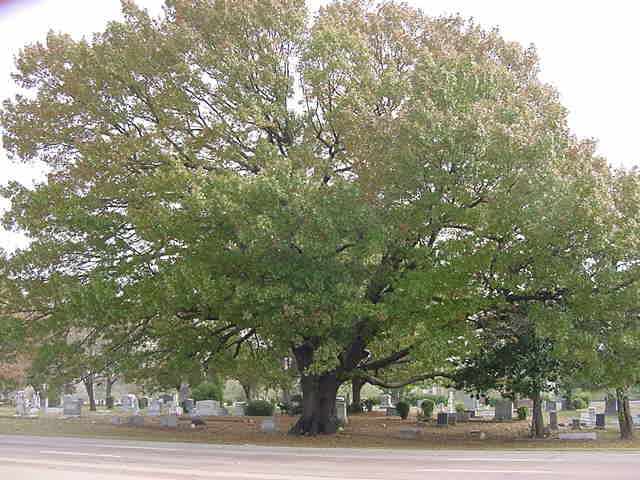 About 100 feet from the Champion Incense Cedar tree in Garland Memorial Park along South Garland Avenue once stood the majestic State Champion Shumard Red Oak. This oak was recognized in 1999 by the Texas Forest Service as the largest of its species in the area including all of Dallas, Tarrant, and eight adjoining counties. Sadly, the only thing left today is its massive stump which serves as its own headstone. The old cemetery oak had become sick with wood decay and posed a danger to visitors in the cemetery and to the traffic along South Garland Avenue. It was removed in 2011. During its prime, the oak stood over 70 feet tall with a crown spread of more than 95 feet and a trunk circumference of 17 feet.

The tree’s problems began around 2008 when a deadly fungal pathogen (Ganoderma lucidens) was discovered along the tree’s root flare. The tree had been tended to for over 15 years by arborist Steve Houser. It was cabled for additional structural support and a program of deep root fertilization was implemented to hopefully extend its life. Drought weakened an already distressed tree and it became infected by hypoxlyon canker, another opportunistic fungus. Thus began the rapid decline of this old stately oak that stood for an estimated 175 years as a quiet monument along with the headstones of hundreds of departed souls.

Hundreds of local citizens gathered on the day of the tree’s removal to mourn the loss of such a monumental and grand Oak. The tree was a community landmark for generations of cemetery visitors, spanning from the early pioneer days of the mid-19th century to 2011.

According to an article by Michael R. Hayslip in the April 1, 1999 issue of The Garland News, the original planners of the cemetery apear to have worked around the tree, laying out plots so that the oak stood in the middle of the east-west walkway to Garland Avenue, in the late 19th century. The base had grown well beyond that into adjoining lots. The Red Oak grew in a roadside strip of land originally equipped with wooden hitching posts to accommodate the mourner’s horses and buggies.

The Garland News article also quoted Jerry M. Flood, descendant of a pioneer Garland family, local historian and biologist. He stated that Shumard oaks flourished in riparian forest-woodlands along the beds of creeks and rivers. He noted that the cemetery oak grew more than 300 feet from the banks of Duck Creek, which flows adjacent to the cemetery, and that the creek may have been much wider before settlement began than it is today. Flood stated that the broad span of this tree suggests it never contested for space, at least until the roadway widened.

The Garland community loved this gentle old giant Oak, and people grieved deeply when it was taken down. Phone calls flooded into the cemetery office as well as to The Texas Historic Tree Coalition. People were desperate to find a way to keep the tree from being removed.  In the end, the tree was a danger to passers-by, and had to be removed. The stump can be found near the other historic tree at the cemetery; The Garland Memorial Cemetery Incense Cedar Tree.