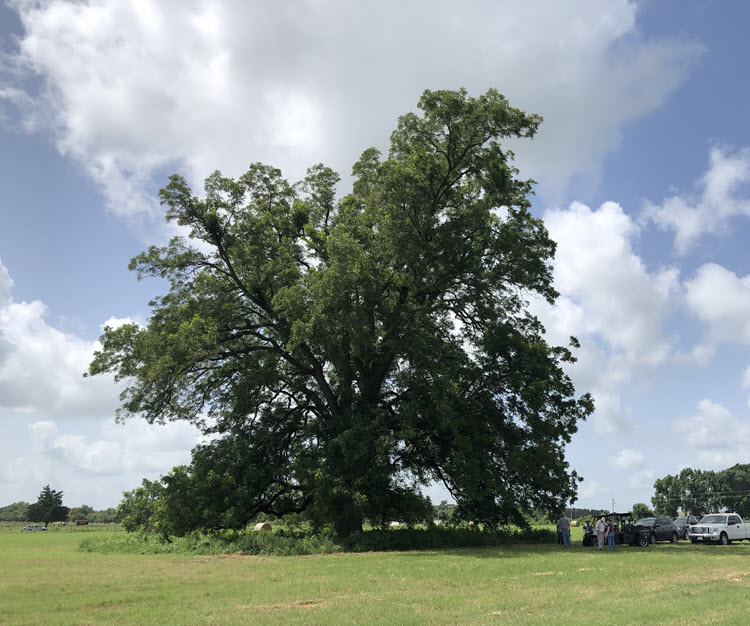 There is a grand old Pecan tree in Limestone County, that sits on the outskirts of Groesbeck, Texas. It is enormous in size with a circumference of 225.8 inches or 18.82 feet, a height of 94 feet, and a crown spread of 130 feet by 97 feet for an average crown spread of 113.5 feet. It is listed as the seventh-largest known Pecan tree in the state of Texas according to the Texas A&M Forest Service. On July 17, 2021, the Texas Historic Tree Coalition visited the town of Groesbeck to inspect the tree, and at that time, determined the tree to be at least 250 years old.

The Fort Parker Pecan grows in the Blackland Prairie, once inhabited by passing bison herds and the American Indians who hunted them; and now in the middle of a pasture between the Fort Parker Memorial Cemetery (located about 150 to 200 yards to the south) and the Old Fort Parker Historic Park (located less than a mile to the northeast).

The Pecan tree’s age and location ensure it is a living witness to the first settlers as they moved into the area, particularly Sarah and Elder John Parker and their extended family. Between 1833 and 1835, the tree stood silently by as the Parker group cleared the land for farming and built cabins to live within. Since there was still a threat of attack by the American Indians, they also constructed Fort Parker and enclosed it behind a defensive palisade or stakewall for protection.

Luckily, the Pecan tree was spared when the Parker family cleared the land for fields and buildings. Since it would have already been a large tree, its shade was probably a welcome relief when they were working in the fields on warm sunny days.

On one such day, May 19, 1836, when most of the men were out working in the fields, a large party of up to 500 American Indians attacked the fort, killing the five men meant to protect it. While the men fought, most of the women and children were able to escape through the small back gate that allowed for easy access to the spring (and the woods where they hid). In the end, the Indians kidnapped two women and three children. Two of the children were Cynthia Ann Parker and her brother, John Parker.

The Pecan tree must have witnessed the American Indians as they approached and departed the fort less than a mile from where the tree grew. And it certainly was a witness to the survivors of the Parker group as they laid to rest the five men who lost their lives trying to save the women and children. They were buried a stone’s throw away from the Pecan in what is now called the Fort Parker Memorial Park and Cemetery.

The young captive, Cynthia Ann Parker would eventually marry a Comanche war leader and have two sons and a daughter with him. One of the sons would grow up to be Quanah Parker, a Comanche warrior, and the last Chief of the Kwahadi band of the Comanche. He is most known for being a leader and the main spokesman of his people during and after their difficult transition from freely roaming the southern plains to life on a reservation. It was a role he performed for 30 years.

The Texas Historic Tree Coalition will present the current owners of The Fort Parker Pecan, Tammy and Ricky Rand, with a certificate and proclamation in the spring of 2023. The Rands are familiar with the history of the site, and they understand and appreciate the tree’s significance. We thank them for their stewardship and loving care of this majestic tree.