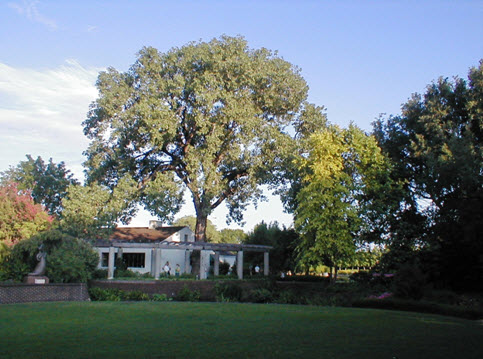 This majestic cottonwood, standing more than 70 feet tall with a circumference of more than 12 feet, stood at the center of the Texas Discovery Gardens at Fair Park for more than 70 years. It was admired for its towering beauty for decades, providing bountiful shade for hundreds of thousands of visitors to the State Fair of Texas. Over the years, it has witnessed thousands of weddings performed in the garden under its 65-foot canopy. Official measurements on May 8, 2003 were 73 feet high, 148 inches in circumference , and a crownspread of 65 feet. Sadly, the cottonwood was cut down on March 25, 2008. A bit of the stump still remains on the site today.

The cottonwood was located on the west side of the historic “House of the Future,” built by the Portland Cement Company in 1936 for the Texas Centennial Exposition. The Cottonwood may have been planted on the site in 1936, or it may have started to grow there on its own.  The House of the Future was one of four fully furnished model homes representing visions of homes of the future. The model homes were sponsored by Centennial Model Homes, Inc., Masonite Corporation, Portland Cement Association, and Southern Pine Association. After the Fair, three of the model homes were moved but the Portland Cement Model Home remained at Fair Park. It was restored in 1984 by the Dallas AIA. It has since been used by the Discovery Garden as offices and can be rented for special occasions.

The tree was given historic status by The Texas Historic Tree Coalition on June 17, 2003.  At that time, it had been a living witness to approximately 50 State Fairs.  At the end of it’s life, the tree had started sloughing off branches and bark, and it was becoming a safety hazard.  Preservation Tree Services removed the tree.  Two large sections were kept to use for sculpture.  One sculpture can be found at the Natural Learning Center at Texas Discovery Gardens.  The rest of the tree was recycled for mulch.

Gone But Not Forgotten

There was something special about this old cottonwood tree.  Every once in a while someone will ask us about it or just want to reminisce.  The tree may be gone, but it’s certainly not forgotten.  Why is it that people became so attached to this tree?  Have a look at some of the photos taken throughout the years.  Why do you think people are drawn to great old trees like this one?  The staff at Texas Discovery Gardens were thoughtful about the removal of the tree, and took steps to do something meaningful with some of the wood.  A sculpture was made and placed in the Learning Center.  What a great way to preserve the memory of the tree!  What are some other things that could be done when a great old tree must come down?

Do you ever wonder what the chances are for another beautiful giant to grow where one has been lost?  In this situation, the chances are good.  Whatever is planted in these gardens will be well taken care of.  And that’s a happy ending to a story that so many have enjoyed throughout the years.  The next time you visit the Texas Discovery Gardens, find a favorite tree and show it some love.  It could be the start of a long and beautiful friendship.

Nomination, research, and copywriting by Jim Bagley and Bill Seaman