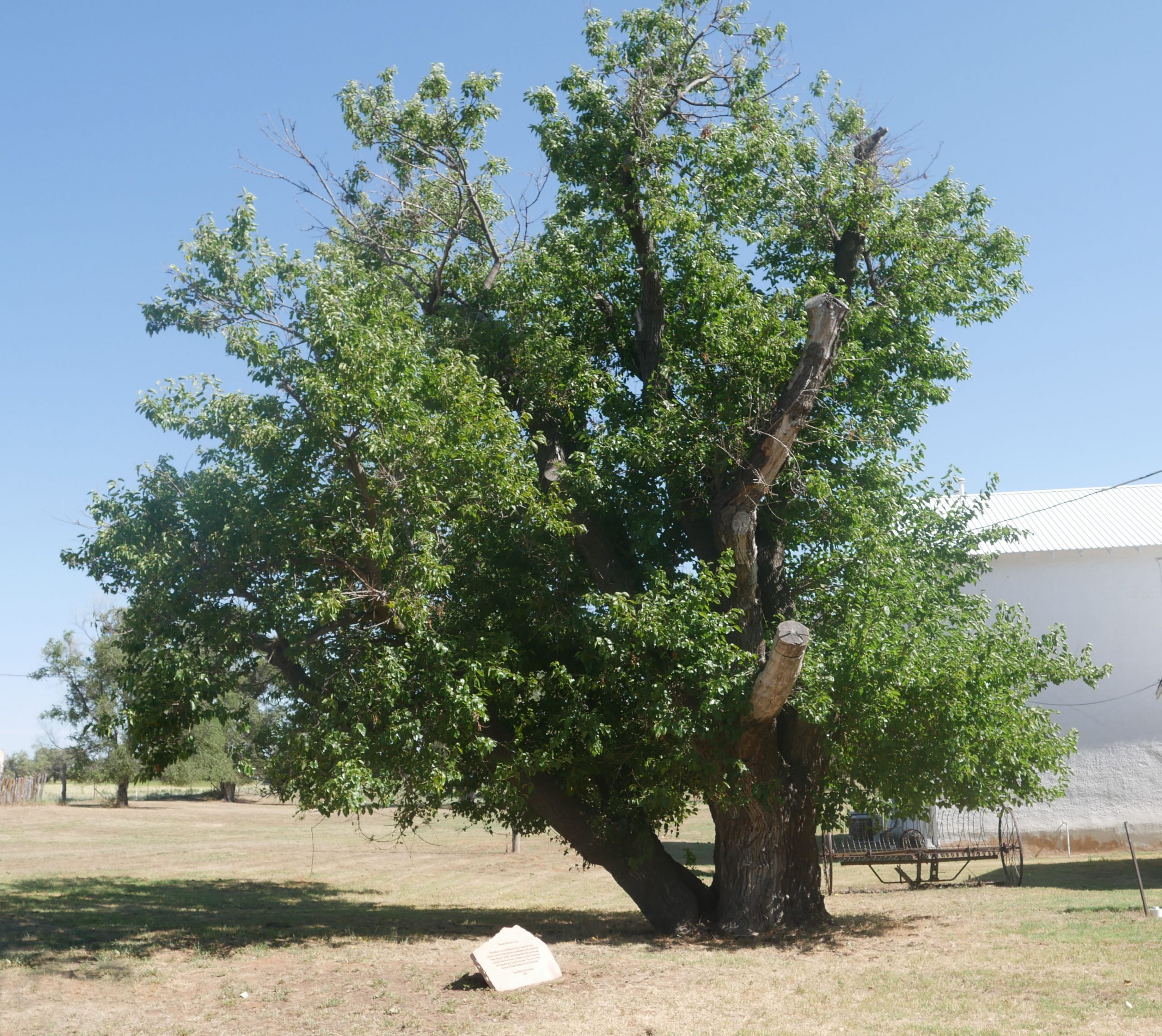 Years ago, across the South and Southwest, it was not unusual to plant a tree in memory of a loved one, especially a child. There is a tree in Old Mobeetie in Wheeler County, Texas that is said to have been planted in memory of Sam Houston’s granddaughter, Louise Houston, who died there at the age of two from cholera infatum (an acute noncontagious intestinal disturbance of infants). Today, a large Mulberry tree stands on the property once owned by Temple Lea Houston, Louise’s father, and the youngest son of Sam Houston. At 132 years old, the tree stands as a reminder of Houston’s place in the history of the Texas Panhandle.

Mobeetie, Old and New, has a colorful history. In the 1870s, the decision was made to protect cattle drives and encourage settlers moving west to locate in the area. The first military post was located on Sweetwater Creek. It was later named Fort Elliott in 1875. Nearby, the town of Hidetown emerged as a center for the buffalo-hide trade. Hidetown may have gotten its name from homes that were made of buffalo hide. In 1878, with the decline of the buffalo, residents moved closer to the fort and named the new town Sweetwater. In order not to be confused with another town of Sweetwater, the name Mobeetie was chosen as it was thought to be the Native American name for good or sweet water. When Wheeler County was formed in 1879, Mobeetie became the county seat as well as a commercial center and judicial center of the 35th District. Unfortunately, the town began to decline when Fort Elliot closed in 1890. Then, after a deadly cyclone in 1898, the town of Wheeler became the county seat. When the railroad bypassed Mobeetie by locating the rail line two miles to the north, residents and businesses moved to New Mobeetie, now a stop on the railroad.

So, how did Temple Houston come to be in Mobeetie and plant a tree? The youngest son of Sam Houston had a rather colorful life and an equally colorful reputation. After losing both his parents by the time he was seven, he went west to be a cowboy at 12. When he returned to Texas at 17, he had worked on a riverboat and served as a congressional page in Washington DC. He graduated with honors in law and philosophy from Baylor University in 1880. He then worked for a law firm and passed the bar and soon became the attorney for Brazos County, Texas.

In 1882, Houston was appointed the District Attorney for the 35th Judicial District of Texas which covered a large portion of the Texas Panhandle. In 1883, he married Laura Cross and moved to Mobeetie to open his law office as District Attorney in the new town. Several of his children including Louise were born there. He was elected to the Texas State Senate for District 19 in 1885 (the same year Louise was born) and served through 1889. After living in Austin, he returned to the Panhandle and served as an attorney for the railroad. He ran for and lost the election for Texas Attorney General. In 1893, he moved his family to Woodward, Oklahoma where he lived until his death in 1905.

Today, Old Mobeetie is a testament to the past. In addition to the Historic Jail Museum, there is a schoolhouse, residence, barn, and a rustic flagpole attributed to Fort Elliot. Many community and social activities take place each year to celebrate the town’s historic past and its present location. There is a grave marker for Louise Houston in the nearby Mobeetie Cemetery.

This Mulberry tree in Old Mobeetie, Texas is said to have been planted in memory of Sam Houston’s granddaughter, by his youngest son, Temple Houston. Louise Houston died at the age of two in 1887; she is buried in the local cemetery. Houston was a district attorney in the Panhandle and a Texas State Senator. This tree is a living testament to Temple Houston’s love for his lost child.

The marker was installed on July 20, 2019, followed by a presentation by members of the Texas Historic Tree Coalition. Bill Seaman, the Historic Tree Project Chairperson at the time, read a resolution recognizing the Mulberry tree as the Temple Houston Tree. The framed resolution and certificate were presented to Joe Vanzant and Ada Lester. Ada was the nominator, and the Wheeler County Historical Commission (represented by Mr. Vanzant) is the steward. Buffalo soldier reenactors provided the color guard for the presentation.

Written by Ann and Jim Bagley