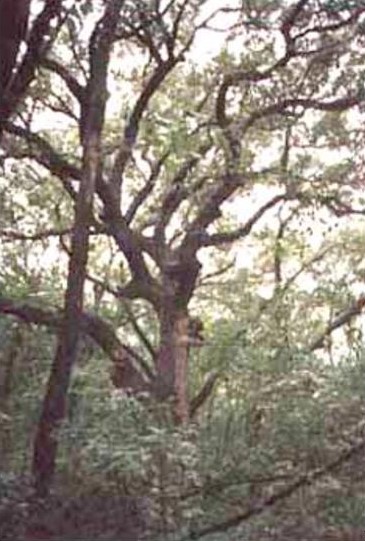 June 10, 1996 was a historic day for the Dallas Historic Tree Coalition.  Not far from the banks of the Trinity River and within shouting distance of the Martin Luther King, Jr. Boulevard Bridge, Coalition members and guests gathered to recognize and dedicate DHTC’s first official historic tree.  The massive Bur Oak, Quercus macrocarpa, has been a witness to the events surrounding its bottomland forest location for more than 150 years.

Those attending the dedication followed a winding path of freshly spread mulch and plywood boardwalk across the recently flooded river-bottom.  At the end of the trail guests found a podium and temporary stage at the base of the oak that reached approximately 80 feet into the Dallas sky.  The tree’s broad crown had been recently groomed by arborist and Coalition member Steve Houser.

The discovery of the tree has been credited to Ned Fritz, who is considered by many citizens to be the patriarch of the local environmental movement.  Mr. Fritz, who has explored and studied much of the Great Trinity Forest, hosts the Trinity River Buckeye Trail each spring.  It is an event that coincides with the opening of a rare, cream-flowered understory tree endemic to the area.

The Dallas Historic Tree Coalition, a grass-roots organization of citizens passionate about preservation, chose the massive Bur Oak to bring attention to the extraordinary resources the Great Trinity Forest provides the citizens of Dallas and the North Texas area.  The oak is representative of the many old-growth trees found in the bottomland hardwood ecosystem of the Great Trinity Forest. A Historic Tree Registry certificate was presented to Dallas Park and Recreation Board President, Lois Finkleman.

The large acorns from this tree have been collected so others can plant their own Trinity Forest Bur Oak.  Seedlings may be ordered from American Forests.