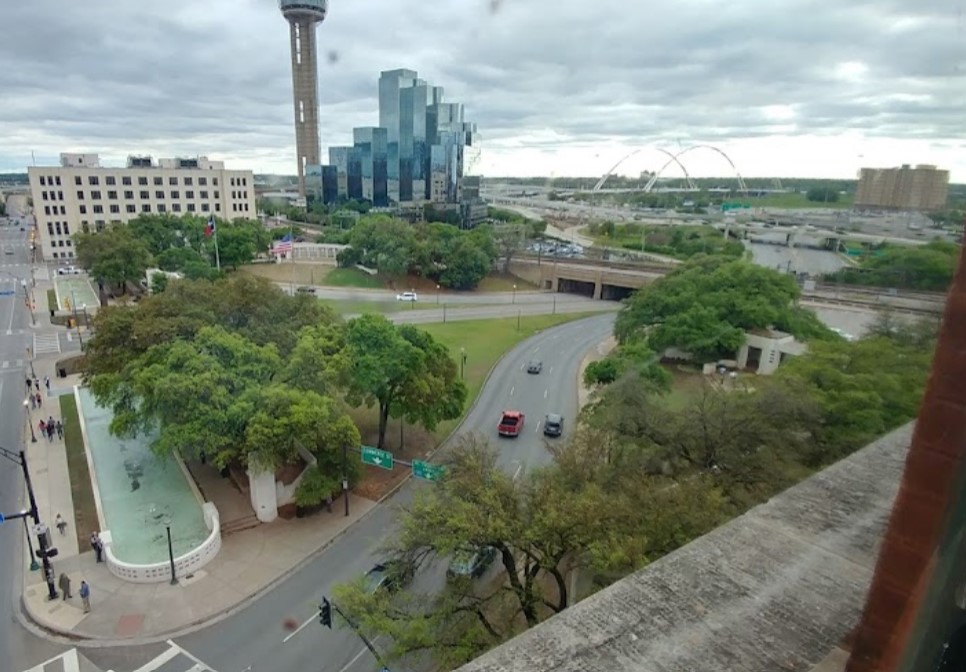 The grove of trees consists mostly of Live Oaks on the north side and in the two center medians, with a combination of Live Oaks, Red Oaks, and Cedar Elms on the south side.

Dealey Plaza is a city park in the West End Historic District of downtown Dallas. The park was designed and built in the late 1930s with the finishing touch being the planting of the trees outlining the park. Six Live Oaks, Quercus fusiformis were aligned along two fountains paralleling Houston Street. Live Oaks and Cedar Elms, Ulmus crassifolia were planted on the north side and in the center of the plaza. In addition to the Live Oaks and Cedar Elms, Red Oaks, Quercus spp. and other species lined the approach to two curving pergolas beside curves on Elm Street and Commerce Street. The pergolas honor two of the founding families of Dallas, the Bryans and Cockrells, who lived and worked originally on the land occupied now by the park.

Sometimes, Dealey Plaza is referred to as the “birthplace of Dallas”; other times you may hear it called “the front door of Dallas”. Whatever this tree-lined park is called, it is still most widely known for being the place of John F. Kennedy’s assassination.

The Dealey Plaza Grove witnessed this unsettling event, as President John F. Kennedy was taken by his presidential motorcade into the heart of Dealey Plaza on that fateful Friday, November 22, 1963. For those who witnessed President Kennedy’s assassination- whether they were in the plaza, watched the breaking news bulletin on television a few minutes after he was shot, or heard the news on the radio, it was a moment in time they will never forget.

It was a deeply disturbing day for all Americans, but for the people of Dallas, there was an intense feeling of remorse because the president was assassinated here in our hometown.

Our 35th president of the United States was the youngest president ever elected and he was a popular well-liked president. For multiple reasons including these, his assassination has been the subject of many books and theories, with several of them originating out of the Dallas area.

In 2004, a tree care expert company in the Dallas/Fort Worth area solicited the support of other tree care companies around the state to prune and fertilize trees in the plaza. It was a pro bono donation to help the living witnesses of a historic and tragic event.

In 2008, the plaza was renovated and in October of the same year, Dallas city officials had the media cover the reopening of the park.

Of the original trees present at the time of Kennedy’s assassination, there are twenty-two Live Oaks and five Cedar Elms that remain, including the ‘line-of-sight’ tree. The ‘line-of-sight’ tree, a smaller Live Oak at the time, had the bullets pass through its canopy that struck the president as he waved to the crowd. This particular Live Oak is relatively small still, most likely due to limited growing space and heavy foot traffic on the grassy knoll.

Throughout the years and even now, Dealey Plaza has been a place of observance for our 35th president. The Dealey Plaza Grove has grown to provide shade, beauty, and comfort to people sitting by the fountains while reflecting on the historic events of the past or walking to the pergolas to learn about the founding families of Dallas.