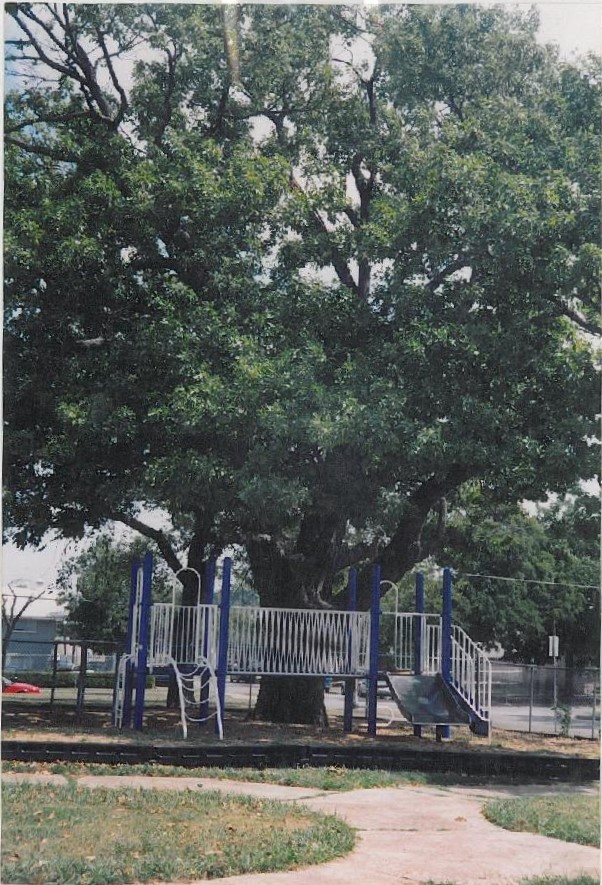 The Conservation Committee of the Nancy Horton Davis National Society Daughters of the American Revolution (NSDAR) nominated the Adamson High Red Oak for historic status in 2004.  According to their nomination, the tree is believed to have sprouted in 1912 and was there when Oak Cliff High School moved there in September of 1916, to its new location on Ninth Street.  At the time of the move Mr. W. H. Adamson was principal; and the school, which had been Oak Cliff Central School and served students from elementary through high school, became Oak Cliff High School with seniors graduating from Main High School on Bryan St. in Dallas.  Mr. Adamson was responsible for getting the school board to approve high school graduation from Oak Cliff High, and the first seniors (32 of them) graduated there in 1918.[1]

According to the committee nominating the tree, the Oak stood east of the building and adjoined the practice field.  So it witnessed all of the development of the high school, including additions in 1974 of the child development cluster and auto mechanics cluster.  A playground for the three- and four-year old children was laid out west of the tree.  Other additions included a tricycle path and gravel area beneath the tree.

Besides being a witness to the history of the school, the tree provided beauty and shade for the young children as well as the high school students, faculty and staff; and its leaves and acorns were used in many school projects.  The committee says, “Faculty, alumni, and students consider it part of the proud heritage of W. H. Adamson High School.”[3]

Gone But Not Forgotten

Unfortunately,  high winds caused the old Oak to split in the spring of 2004, with one part  of the tree blocking the street and one part hitting the “automotive portable”, according to Kay Neal in November of 2004.  Ms. Neal contacted Bill Seaman of the Dallas Historic Tree Coalition with an idea for preserving a “cookie” or cutout from the stump.  This piece of the tree would show the rings and would be displayed in the school to teach students how to determine the age of the tree.  Ms. Neal was hoping that new growths coming up near the stump were red oaks, but sadly, they were not.